University of Liberal Arts Bangladesh (ULAB) awarded scholarships to its highest-achieving students of Spring 2015,Fall 2015,Summer 2015 and Spring 2016 semesters on August 13, 2016, at its Dhanmondi Campus.

Dr. Mohammed Farashuddin, Chairperson, Board of Trustees, East West University and former governor of Bangladesh Bank was present as the Chief Guest in the ceremony. In his speech he praised ULAB's contribution to education of the youth. He then challenged the young scholars to take their education and use to benefit those less fortunatein the country. 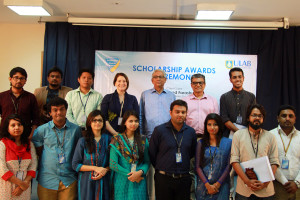 Ms. Juditha Ohlmacher, Member of the ULAB Board of Trustees gave a welcome speech and ULAB Vice Chancellor Professor Imran Rahman gave aconcluding spech with avote of thanks.